We had a great time at our boondocking spot near Mammoth, and were so happy to be camping with our new RV/blogging friends Tim and Amanda, but alas, we were running out of water, so it was time to move on.  That’s the thing about boondocking – you’re somewhat limited by the amount of water you bring with you, and the amount of room in your tanks.  We thought we were super careful about not using too much water, but after 4 days, we were starting to run low.  So we said goodbye to Tim and Amanda, but made plans to meet them at a new boondocking spot down the road in a few days.

Our next spot was Bishop, which was just a short 30-mile drive south.  We aimed for a spot on Casa Diablo road, which is where another blogger, Life’s Little Adventures, had stayed recently.  Once again, we got lucky and found an awesome spot without too much trouble.  I’m getting a kick out of taking pictures of our RV from a distance in our boondocking spots!

Can you see us in the picture?

Our original plan was to stay in this spot until Sunday, when Tim and Amanda would join us.  Unfortunately, Deas and I started taking a serious look at our calendar and realized we had a lot of ground to cover in a short period of time, as I am trying to make it to Memphis in time for my college reunion in about 10 days.  So we made the decision to move on a day early, which meant we would miss the Watsons.  I really hated to miss them, but I know we’ll see them again on the road somewhere, someday!

So we headed south to our next destination – the Alabama Hills outside of Lone Pine, CA.  I didn’t know much about this area, just that it was a popular boondocking area and that it was used in a lot of movies.  As soon as we started driving in though, I was instantly impressed.  The area is full of very large, bizarre looking boulders, with the Sierra Nevadas in the background.

We found a nice boondocking spot off of Movie Road.  There were lots of spots within view of the road, but we found one that was a little bit off the road and nicely sheltered by the rocks.

Our arrival happened to coincide with the last day of the Lone Pine Film Festival, so there were little signs everywhere showing what movies scenes had been filmed in the various locations.  Most of the movies were very old westerns and we had not seen them, but it was still fun to compare the pictures to the scenes behind them.

Deas even recreated a Kirk Douglas pose from the movie Along the Great Divide – this was right next to our site.

We spent the afternoon just wandering in and around all of the boulders.  It’s amazing place – I couldn’t decide if I felt like I was on a movie set, or the surface of the moon. 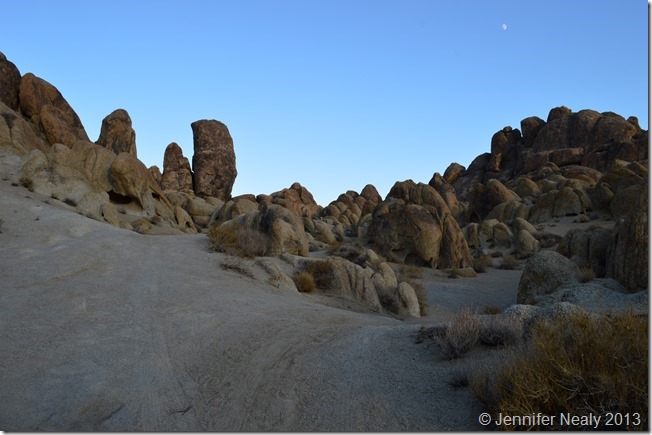 We loved this area and could have easily spent several days here, but once again we had to move on.  On our way out of town we stopped by the Lone Pine Film History Museum, which has lots of memorabilia from all of the movies filmed in the area.  In addition to all of the old westerns, several recent movies were also filmed here, including Iron Man, Tremors, Star Trek 5 & 7, Transformers 2, and most recently, Django Unchained.

Next, we point the RV headed east.

6 thoughts on “The Alabama Hills”