As much as I love the RV lifestyle, I love it even more when we’re able to meet up with friends on the road. Clark and Lynn from Tales from the Mutiny joined us at Glacier along with their friends Craig and Ellen. We moved back to the San-Suz-Ed RV Park to join them there, and we quickly planned a group hike at Kintla Lake in the northwest corner of the park. It was about a 90 minute drive to get there, including a large section on a bumpy dirt road. But the lake is beautiful and the weather was perfect, so we didn’t mind. We hiked about 8 miles roundtrip, mostly on the shore on the lake but also up in the trees.

After the hike we hung out on the shores of beautiful Kinta Lake. The water was crystal clear, and surprisingly wasn’t as cold as we thought it might be. It gave Lynn and Ellen the perfect place to strike a beautiful yoga pose.

The drive back from the hike was beautiful too. 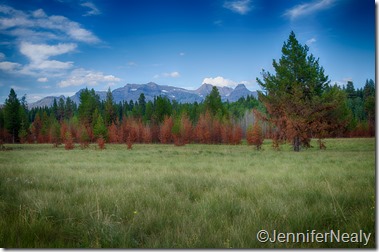 Conveniently, the drive back took us back through Polebridge, so we stopped there for an early dinner. We had delicious huckleberry cocktails, and had to take cover under the porch while we waited out a rain storm. 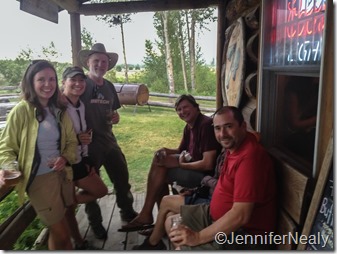 We also hiked the Avalanche trail together. It was a little cold and windy on the day we hiked it, and once again it was pretty crowded. But it’s really a great hike and I can see why it’s so popular. We had lunch on the shore of the lake after the hike, and Lynn and Ellen struck another pose. 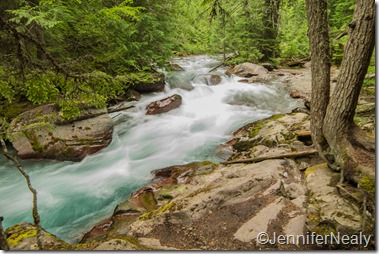 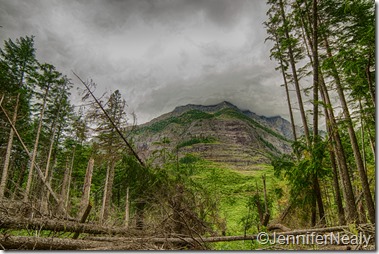 After our hike, we had celebratory drinks at the nearby Glacier Distillery, and then we had a cook out at Clark and Lynn’s RV. And we had the added bonus of Clark singing some songs for us! A perfect ending to a perfect few days with friends.

Our original plan we we left West Glacier was to head to Canada for 8 days. But for some reason, something was really nagging at Deas and I about going. After mulling it over for several days, we made the last minute decision to cancel our Canada plans and head to the east side of Glacier instead. I’ve heard that Banff is absolutely gorgeous, but we were starting to feel like we were packing too much into too short of a time period. We’ve tried really hard this year to move slower and really absorb the places we visit, and not just rush through. And I think we both realized that Canada is worth more than just an 8 day trip. So we’ve put that on the back burner for now, and decided that our next trip out west will include a month or two in both Alberta and British Columbia. We’ll be able to see more and spend more time there. And it also meant that we only had a 90 minute trip the next day, instead of a 6 hour trip that would include a border crossing. So we headed to the first-come-first-served Two Medicine campground early in the morning, and I pulled up in the car just in time to see a big rig pulling out of a nice big spot. I took that as a sign we made the right decision. And the view right in the campground didn’t hurt either!

20 thoughts on “A Glacier Gathering”