After a busy 2 weeks in Orlando, we were ready for some down time. Our next stop was WP Franklin, a COE campground in Alva, outside of Fort Myers. This is a really nice campground that sits on the locks of the Caloosahatchee River. 90% of the sites are waterfront, so you almost can’t go wrong. Sites are water/electric only – there is a dump station on site, but the rules about using it are somewhat peculiar. If you show up and want to use the dump before occupying your site, there is a $10 fee. You can use the dump once per week during your stay, and if you use more than once a week, there is another $10 fee. We stayed for a week, and on the day we left we tried to use the dump station, but it was closed because it was full! So if you stay here, be prepared and show up with empty tanks, and then check to make sure it’s operational on any day you might want to use it.

We were in site 23, and loved the great views from our site.

I mentioned we were looking forward to some down time, and this is a good campground to do that because it’s pretty far away from anything. We did venture out to Sanibel Island one day, and had dinner with our friends Gail and Don (Winecoasters Blog) who live in Cape Coral one night. But for the most part we just took it easy.

Next up was Sebastian Inlet State Park. We knew nothing about this park – the only reason I booked it was because it had an opening on the dates we had open after WP Franklin. A little research told us that it was a big fishing destination, but other than that we didn’t know what to expect. As we were checking in, the ranger excitedly told us that there were some whales in the inlet – something that hadn’t happened in over 50 years. So once we got settled into our campsite, we walked out to the water to take a look. There was a huge crowd of people there, including news crews and airplanes tracking the whales’ movements. But the whales were really far away and we could barely see anything, so after unsuccessfully squinting into the distance for several minutes, we walked back to our campsite.

The next morning we walked back out to the water, and there was nobody there, so we thought that the whales must have moved on. We decided to head out of the park with the dogs for some exploring, but as we drove down the park road we came across a huge throng of people all crowded around the mouth of the inlet and on top of the bridge that crosses over it. 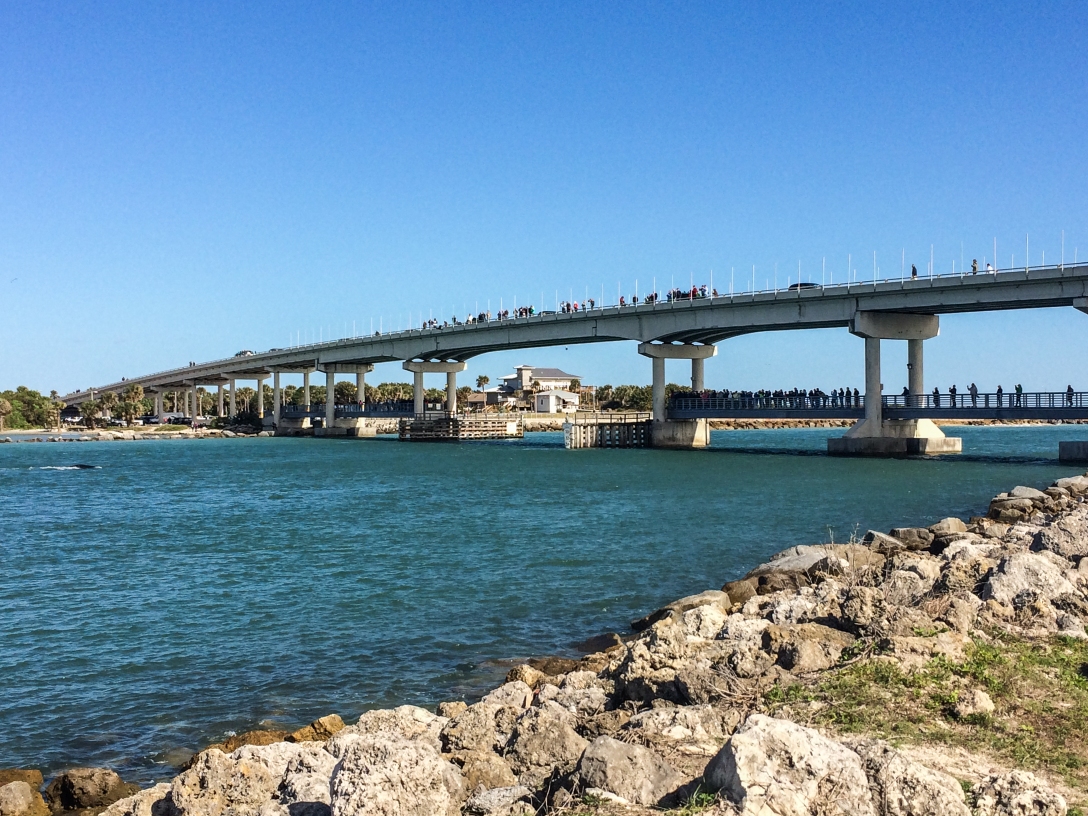 We parked the car in hopes of being able to see the whale a little better this time. We found out that whales were right whales –  a 50-foot right whale and her calf. Since they were much closer to land this time we could see them quite easily. The adult whale has been identified by researchers previously, and she is named Clipper due to a notch she’s got on her fin. Apparently she hadn’t been seen in awhile, and so the researchers studying her were pleasantly surprised when she showed up with a baby in tow. Right whales were so named because they were the “right” type of whale for hunting, and as such their numbers dwindled and they are considered endangered. In the picture above you can just barely see her on the left side. I only had my iPhone with me at the time so never did get a really good picture, but did get at least one good video.

No one was really sure exactly why Clipper and her calf were there. At first they feared that she might be sick, but she was acting healthy and normal. In the video above, she is heading through the inlet back towards the ocean, but every time she would reach the bridge, she would turn around. The current is pretty strong there, and people were theorizing that maybe the baby was having a hard time swimming against the current. Or possibly that the shadow from the bridge was confusing her. We watched her for about 90 minutes, and it was so frustrating watching her turn around at the bridge every time! After awhile we left to take the dogs for a walk, and when we returned a couple hours later, we learned that she and the calf did eventually swim under the bridge and out towards the ocean, to the cheers of everyone who was still watching.

So that was our big excitement for the week! We really enjoyed our stay at this park a lot, and not just because of the whales. It’s just a great park with lots of options for getting on the water, either in the inlet or at the beach. The campground does have some waterfront sites, but those are actually the worst sites in the campground, due to the fact that they are very small and the road runs right between the sites and the water. We ended up in site 30 which I personally think is one of the best sites in the park. We were on the end of our row so we had a lot of privacy. The sites in the back of the campground were all pretty nice too, and the pull-through sites in the middle were gigantic. All sites are water/electric only, and the showers in the bath house were really clean. We would definitely stay here again!

If you’re into birdwatching, there were plenty of shore birds all around.

And the beach was a short walk/bike ride from the campground. 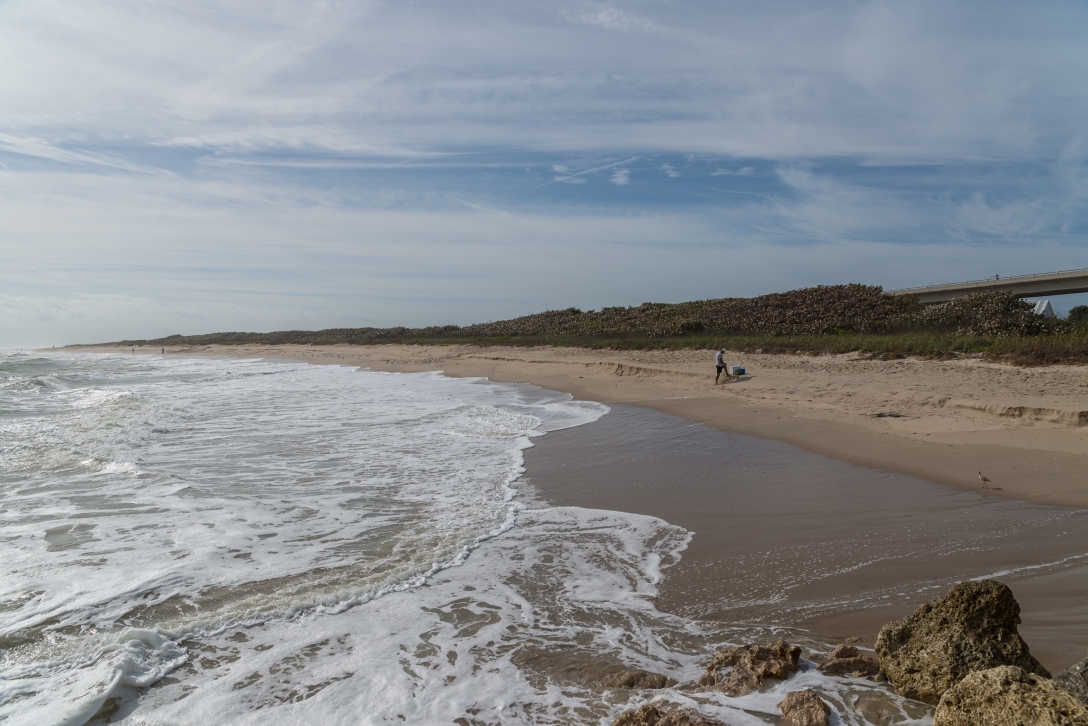 Next we headed a couple hours south to Jonathan Dickinson State Park near Jupiter. Sites here are all full hook-up, and only $26/night. A great deal, but the campground is very close to Highway 1 so you do get some road noise in the sites closest to the highway. Also the vegetation isn’t very mature, so there’s not a whole lot of privacy in the sites. We heard that the campground had been pretty wiped out by a hurricane and then rebuilt, so that may be way. All in all, we think it’s a pretty nice place to stay.

There’s no beach access in this park, but there is a dog friendly beach in Jupiter so we immediately headed there our first day. Our doggies love the beach!

One reason we visited this area was because we have a couple of friends that live there, and so on our 2nd night we met up with good friends John and Jennifer at a local brewery. We first met them in Montana in 2014. Since then they quit full-time RVing, but they missed it so much they are about to hit the road again! Their blog is Our RV Life. We were also joined that night by Mike and Courtenay of Coloring the Void who we met the night before via RVillage. We all had a great time, and John and Jen’s friend named Steve joined us too.

Jupter is pretty close to the ritzy island of Palm Beach, and there is a trail there called the Lake Trail that runs right between the multi-million dollar homes and Lake Worth. So we took the dogs out there and gawked at all of the huge houses. Actually you could barely even see most of them due to the large hedges and privacy gates, so we just gawked at those instead.  One of the homes we walked by used to belong to Bernie Madoff.

Even the gates to the docks were pretty.

And of course there were plenty of nice boats too.

One of the houses had this adorable little dog fountain, complete with pictures of what I assume are their dogs on the tiles. Jake and Nikki were very appreciative for the water – Shorty wouldn’t go near it! I think he was afraid I was going to give him a bath.

One weekend the Jupiter Seafood Festival was going on, so Deas and I spent a fun afternoon there eating fresh seafood, listening to live music, and having a couple of cold beers.

Some of other RVing/blogging friends were also in town, and John and Jennifer hosted all of us at their house one night for an amazing catered Cuban dinner. I didn’t get a picture myself, but our friends Jason and Nikki of Gone With the Wynns took a pic of all of us being silly, so I’m posting their pictures (with their permission.) Also pictured are Jason and Kristin of The Snowmads, and some of John and Jennifer’s local friends.

In addition to all the RV friends we met up with, I also got to catch up with two very good friends that I hadn’t seen in a long time. My college friend Cooper and his new husband Mick had us over to dinner at their house one night, and I got to see my friend Jackie several times that week and spend some time with her sweet family too.

Next up: the Florida Keys!

21 thoughts on “February in Florida”

Leave a Reply to Nealys On Wheels Cancel reply