I made only two advance reservations for this trip – and one of them was for Zion National Park. I hate making reservations too far in advance, but we heard that Zion was so popular that it was highly recommended to do so. We had a short drive over from Kodachrome, and arrived at the park around 11:00. Much to our surprise, there was already a very long line of cars and RVs waiting to get into the park. We had to wait about 30 minutes just to get through the gate, and became very grateful that we knew we had a spot waiting for us in the Watchman campground. We had a great site – lots of room, a great view, and a lovely tree to give us some shade.

However we noticed something odd about our site…we kept seeing people standing right in front of it, seemingly looking at the top of our RV with binoculars. One day we came back from our walk to find a group of 20 people, all looking over our RV with binoculars. Turns out there was a hawk’s next in the tree right behind our RV! Unfortunately the mother hawk had not been seen in several days, and no activity seemed to be happening in the nest. That didn’t stop people from showing up every day though.

One of this nice things about Zion (for dog-owners) is that there is a 3-mile hike that dogs are allowed on. It’s a nice paved path that you can walk to right from the campground, so of course this was the first hike we did. It runs right alongside the Virgin River and has stunning views throughout. 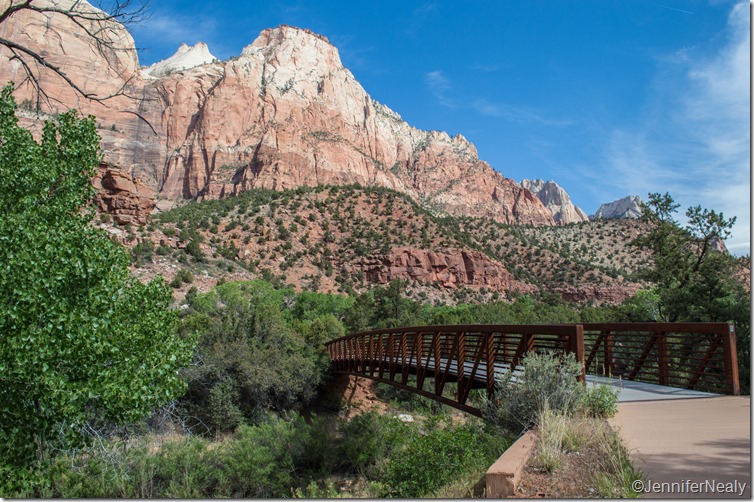 That afternoon we took a drive over to the east side of the park, which is the only part you can access in your own car – you have to take a shuttle to go up into the north side of the park. The drive goes through a mile-long tunnel that is only slightly over 13 feet tall. If an RV does go through the tunnel, the park has to shut down traffic to allow the RV to drive right down the middle of the highway. We elected not to do this, but I could not believe how many RVs we saw that chose to do this. Maybe they didn’t know in advance, or maybe they’re just more adventurous than Deas and I are! The tunnel does have a few “windows” cut into the side of the rock, which were used to throw rocks out of when the tunnel was under construction. You can see one of these windows in the picture below.

The views on this side of the park are just as equally breathtaking. 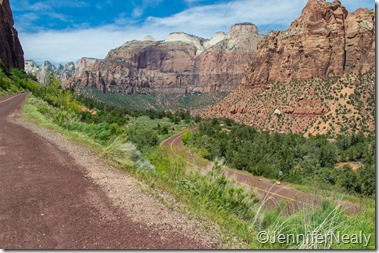 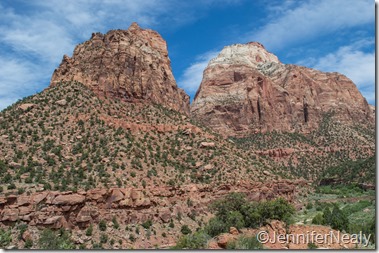 The next day we decided to ride the shuttle into the north side of the park. We took the dogs for a nice long walk to tire them out, and then left them in the RV. We got off the shuttle on one of the first stops for a nice view of the mountains referred to as the Court of the Patriarchs.

While we were at the viewpoint for the Patriarchs, we struck up a conversation with another couple. We ended up talking to them for about 20 minutes, and just as I was about to suggest that we move on, my cell phone rang. I looked at the phone and saw an Idaho area code. Unfortunately, I knew exactly what this meant, and I knew it wasn’t good. It was another RVer calling from the campground, and it was about one of our dogs. You see, we had an issue once before where Jake managed to push his way out of a screen window and run around a campground for an hour before he was wrangled up by another camper. Because of this I have a sign on our RV with our phone number on it whenever we leave the dogs unattended. And we also leave the windows cracked just a little bit, to prevent another escape attempt – or so we thought.

Jake had managed to somehow turn the passenger swivel chair just enough so that he got access to the one window that was large enough for him to push through. Fortunately, the couple in the RV next to us happened to look over just in time to see Jake halfway hanging out the window. They very kindly rushed over to start yelling at him, and then called us. We immediately hopped back on the shuttle, but of course we got the slowest shuttle driver in the whole park and it took us a good 20-25 minutes to get back to the campground. The couple that called was still standing outside the RV when we got there, and they were holding some sort of pole that they would use to tap Jake on the nose whenever he tried to push himself out again. Seriously, what is wrong with this dog?? We thanked them profusely and ran inside the RV to find a nearly hysterical Jake and a very calm Nikki and Shorty. I don’t know what Jake’s issue is, but he HATES to be inside. He wants to be outside all day – he would probably sleep outside if we let him. Even at our house he insists on spending all of his time on the porch or in the backyard.

Deas was beside himself with frustration. In an effort to try and wear Jake out, we took them all on another walk, and then Deas rode the bike for about 20 minutes with Jake running along beside him. Deas went ahead back to the shuttle and I stayed behind for a little while to see if Jake would settle down. After another 30 minutes, he was still pacing, so I took drastic measures and drugged him with benadryl! I felt bad about doing it, but I had to get him to calm down. I don’t know what we’re going to do about him.

After Jake finally settled down, I took the shuttle to meet up with Deas. We had planned to do a few hikes, but at this point I was anxious about what other mischief might arise back at the RV, so we just rode the shuttle the whole way and looked at all the sites. We did decide to take the trail that leads to the Narrows, the hike that takes you right through the Virgin River. The part of the hike that leads to the river is paved and very easy, and runs right alongside the river itself. 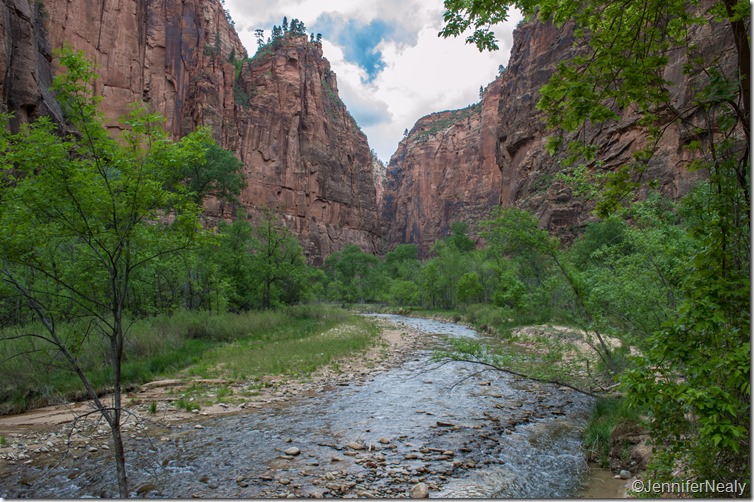 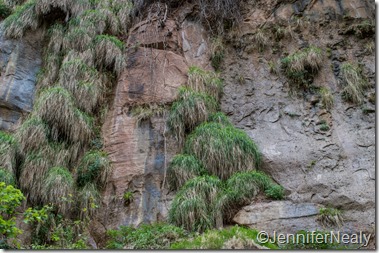 One of the things that cracks me up when we’re in national parks is the number of people that I see taking pictures of rodents…squirrels, chipmunks, etc. Don’t these people have squirrels at home?