After departing Montana, we made a mad dash through Wyoming with two quick overnight stops, and headed towards Colorado. We wanted to spend a week in/around Denver, and decided to try to get into the Clear Creek RV Park, a first-come-first-served park run by the city of Golden. We heard about this park from reading the blog Live, Breathe, Move, and Jeremy and Robin said that it was one of their very favorite parks. Their system is kind of unique – instead of just showing up and hoping for an available spot, you are supposed to call first thing on the morning of your intended arrival. They put your name on a list, and as people start departing, they go down the list and let you know whether or not you have a spot. They open at 7 am, and we started calling at 7 on the dot. Deas started calling first, and kept getting busy signals! So I started calling with my phone also. We were making rapid-fire calls, hanging up when we heard the busy signal and immediately dialing again. After about 10 minutes and around 60 phone calls between the two of us, Deas finally got through. We were told we were #6 on the list, and we were nervous we wouldn’t get a spot. But happily, we got a call a couple of hours later that there was a spot ready for us, so we headed that way.

We were lucky enough to get a great full hook-up spot that backed up to the Clear Creek which runs right behind the campground. Every day we saw lots of people walking by with their river tubes and having a blast floating down the creek. On our second day we gave in to temptation and bought two tubes of our own. We had a blast floating down the river a few days, but alas did not get any pictures.

We have a pretty busy social week while we were there. We were lucky enough to meet up with several other RV bloggers who were all in town. We met Tim & Amanda (Watsons Wander) last year and did a little boondocking with them, so we were really excited to be able to meet up with them again. We were joined that night by Ingrid & Al (LiveLaughRV), and Jeremy & Robin (LiveBreatheMove) – I read both of their blogs but this was our first time to meet in person. We all met up a local brewery – Mountain Toad – and our dog Jake joined us too! Later in the week Deas and I joined Tim & Amanda at their airstream and Amanda made us some delicious tacos. Our good friends Andy and Allison live in Denver, and we had dinner at their house one night and Allie met us in town one night with their daughter Ella. 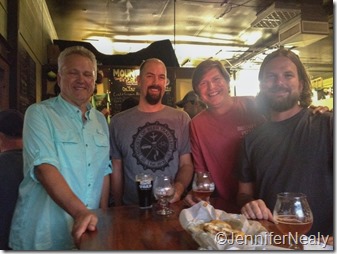 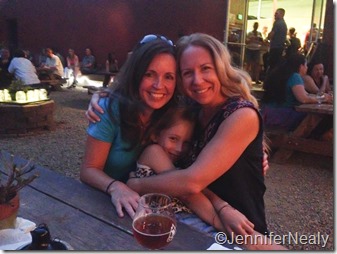 We did a few small hikes this week, and lots of exploring via car. We visited the famous Red Rocks Amphitheater during the day, but didn’t get to see a show there. There was an arts festival the weekend we were there and we had a great time walking around that and eating from the food trucks. The location of the campground was awesome – several nights we just rode our bike about 5 blocks to the Mountain Toad Brewery. In fact, we may have gone there 4 times that week. The last night we were there, the bartender greeted me by name and asked if I was local! But it was such a great place we couldn’t help it. The beer was delicious, there was a different food truck there every night, and the outdoor patio was awesome – one night we were even treated to an impromptu blue grass jam. We also spent a lot of time just sitting at our site at the campground – reading books or having happy hour. I didn’t really take a whole lot of pictures this week, but here’s a few showing the various things we did and saw. 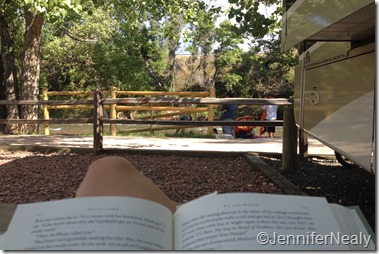 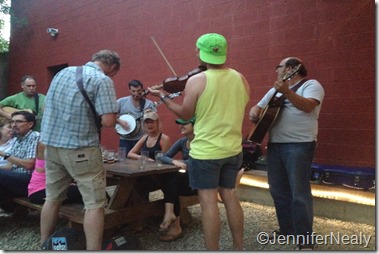 I highly recommend the Clear Creek RV park if you’re visiting Golden and can handle not having reservations. The sites are very, very tight, but for us the location more than made up for it. And having the creek right behind us was awesome. During the day there was a lot of foot traffic, but at night we could open our windows and listen to the water.

We had so much fun in Golden that we seriously considered expanding our stay by a few days! But then responsibility got the best of us and we decided it was time to move on. We have a house in Georgia that we haven’t lived in for 3 years, and that we have not been able to sell. We decided that we need to go stay in the house for a few weeks to check on it and make sure everything’s okay. I checked the map and we had about 24 hours of driving in front of us. The fastest route would take us through KS, MO, IL, KY, and TN. All of those places were experiencing close to 90 degree days, so we decided to cut the sight seeing short and just push through as fast as we could. The first night we stayed in Ellis KS, and an awesome city-run park – the Ellis Lakeside Campground. The sites are water/electric, and only $15. There’s no pay station – you just get set up and then wait for the police to come by and take your payment. The sites are shaded, the park is very quiet, and there were only about 5 of us there that night. And there was even excellent free wi-fi! 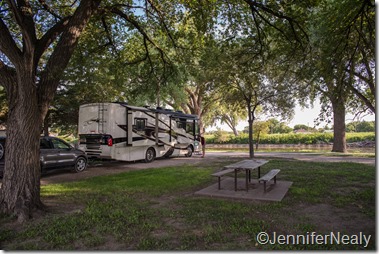 The second night we made it to Arrow Rock State Park in Missouri. This was a very nice park with lots of large, paved, level sites. We had the place pretty much to ourselves. Besides the camp hosts, I saw one other RV and two tent campers. A perfect over night stop, but I did not get any pictures. The third night we made it to Granite City, IL and stayed at Horseshoe Lake State Park. This time we were the only people there! There was a camp host, but their RV was just sitting there empty. It was a little bit of a strange situation as the signs to the campground weren’t marked very well, and there were no instructions on how to pay. We tried to call the office but they were closed for the day, so we planned on calling again the next day. In morning the camp host returned home, and pulled into our spot in her car and started honking her horn. Deas walked out and explained that we had gotten there the night before and we weren’t sure how to pay. I’m not sure why she got such an attitude with us – maybe she is used to having the whole place to herself! It was a pretty site right on the lake, but it was really hot, and terrifyingly buggy. I could tell we were getting closer to the south. But we enjoyed a fantastic sunset that evening over the lake. 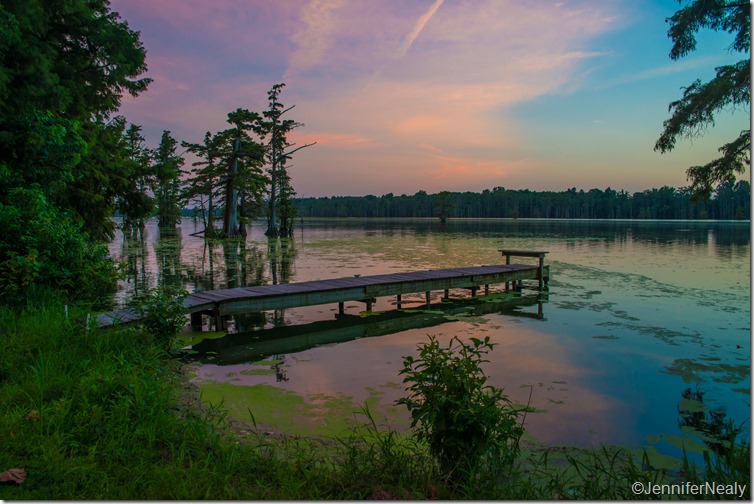 On day 4, we planned to spend the night near Chattanooga. But when we got there, it was only 4:00, and we only had a couple of more hours to go. So Deas decided to push on, and we made it all the way to our house. 1400 miles in 4 days! We were exhausted but we are looking forward to spending a few weeks in Georgia and visiting our friends and family. So we won’t be in the RV for the next few weeks, but at the end of the September we’ll be loading up and heading to Florida for the winter.

10 thoughts on “Glorious Golden and a Cross Country Trek”