Our next stop along the Oregon coast was the tiny little town of Netarts.  Netarts Bay is known for its oysters, and being a Louisiana girl, I was interested in giving them a try.  We stayed at the Netarts Bay RV Park & Marina.  It wasn’t a marina like we were expecting – the only boats there were the crabbing boats that they rent out.  Still, it was a nice, quiet park and we had a decent site.

Netarts is so tiny that there aren’t a lot of restaurant options.  We decided to try some oysters at the restaurant that was just down from the RV park with a nice view of the bay.  Deas doesn’t like raw oysters, so we ordered a half dozen that were baked in a Rockefeller-ish way, and one raw oyster shooter for me.  The shooter was good – they oyster had a nice mild flavor.  Personally I didn’t like it as much as the Apalachicola oysters we get in Florida.  The half dozen baked osyters, however, were awful.  To be fair, it was the preparation, not the oyster, that was bad.  The spinach on top was definitely previously frozen, and the cheese mixture that was squirted on top was way too heavy to sit atop an oyster.  Two thumbs down from the Nealys. 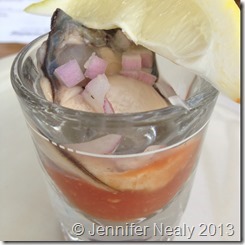 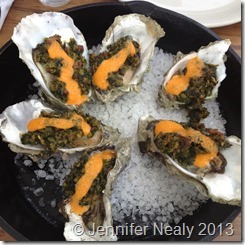 But we didn’t want to judge the oysters on that experience alone, so the next day we bought a dozen unshucked oysters and two pounds of steamer clams, and Deas prepared them himself.  He grilled the oysters with a little parmesan and garlic, and steamed the clams in white wine and butter.  Delicious. 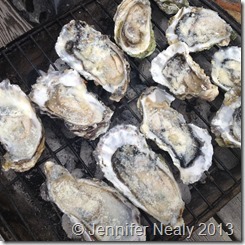 We spent some time exploring the areas north and south of Netarts along highway 101.  We first headed south towards Pacific City, and saw some signs for camping at the Sand Lake Recreation Area.  We hadn’t heard of it before, so we pulled in to take a look.  One of the first things we noticed was that every camper had some sort of vehicle with them that looked like this: 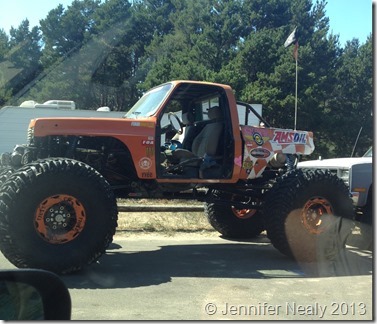 We thought it was little odd, but figured it out when we got to the back of the park.  Sand Lake Recreation Area contains over 1,000 feet of sand dunes, which are open for people to explore on ATVs.  The area was huge – the dune buggies in the first two pictures are just tiny dots in the distance.  We spent some time watching them and couldn’t believe how many people were there to do this. 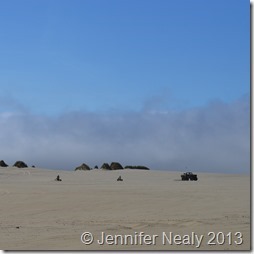 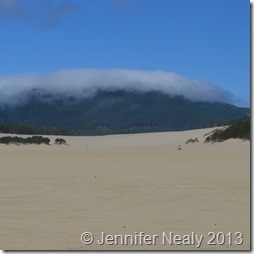 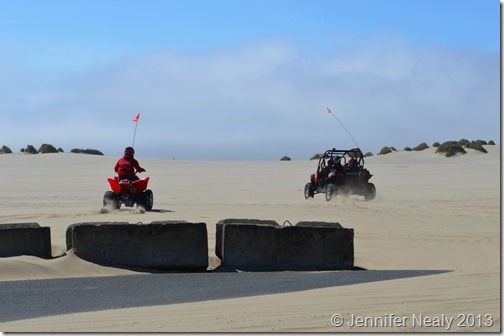 Next, we drove into Pacific City and saw the beautiful Haystack Rock.  I didn’t realize there was more than one Haystack Rock, but apparently there are 3 sea stacks in Oregon with this name.  The most famous one is in Cannon Beach, but this one in Pacific City is actually the tallest at 327 feet.

Right next to this beach is a large sand dune in the Cape Kiwanda State Natural Area.  People were walking up to the top for exercise, and a bunch of kids were running down it at break neck speed.  Deas and Jake climbed up to the top while I watched from the bottom.  I eventually had to walk a little further away because I kept laughing out loud at all the kids face planting in the sand over and over again!  Deas thinks this is the weirdest thing about me, but something about people falling down makes me laugh every time – as long as no one gets hurt!  Deas and Jake are the tiny specs in the middle of the picture below. 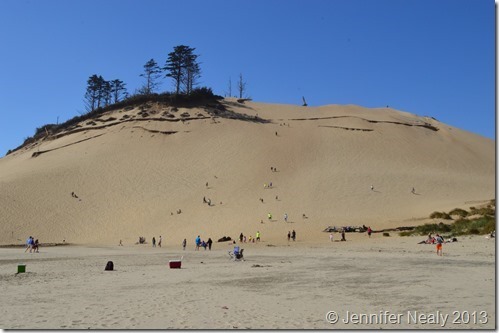 The next day we spent some time in Oceanside, which is just north of Netarts.  The Three Arch Rocks National Wildlife Refuge is a half mile off shore in Oceanside.  It was a foggy day when we were there but it was still beautiful. 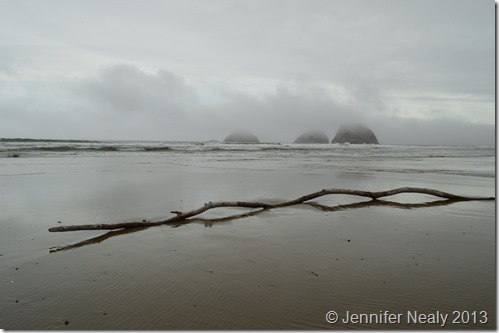 There are a lot of dead sea creatures on the pacific northwest beaches, and I always notice these pretty little crabs.

On our last day there, my brother and his wife drove in from Portland we got to spend the day with them.  We had breakfast in Oceanside and then went for a hike in the nearby Cape Meares State Scenic Area.

We didn’t see the Cape Meares lighthouse this time, but we had been there a few years ago and it’s definitely worth the short hike to get there if you’re in the area.

Later we walked on the beach in Cape Lookout State Park.  There’s also a great hike in that park, but the weather wasn’t that great, and since we each had a 2-hour drive in front of us (Brandon and Cassie back to Portland, and us to Newport), we just spent some time hanging out on the beach.

I’m hoping to meet up with my brother again in Bend sometime next month.  It’s been a treat getting to see him and Cassie so often the last several weeks!